One of the real delights of the cowboy campaign is that it is throwing up various styles of scenario, and with 8 active players each with differing approaches to achieving success giving me some things think about while I organise it.

So last night saw one of the gangs who were out in the Indian Territory being presented with a scenario where they had heard a commotion from over the hill and had set off to help and save the intrepid settlers/explorers – the Pearson family who were under attack from a notorious Indian leader “Two Clouds”. 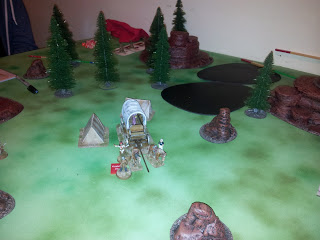 Steve was playing the Indians, The Pearson’s were played by me as GM and were nervous as hell!!  Pa a prospector had taken the family into the hills to seek his fortune, Ma, Sissy and Junior were at the wagon when Indians were seen up on the rocks, and warning shots had been fired.

The commotion had alerted Dom’s gang to some excitement. Could they get some good fame points by rescuing the embattled Pearson’s, or better still see off the pesky varmints. 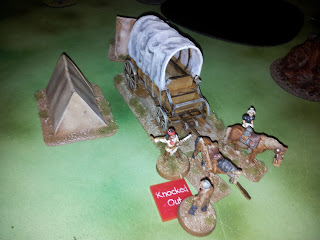 Dom got lucky dicing to come on the side of the table with no Indians between him and the Peason's.

“Two Clouds” looked on as “Never Silent” and “Grey Wolf” harried the poor citizens with some long range fire. “Runs with the wind” using his SWIFT skills raced from the rocks charging towards the tethered horses looking to incapacitate one. Pa Pearson seeing the threat moved to fight him he could not use his shotgun for fear of killing his animals. A vicious hand to hand took place with multiple blows being exchanged , “Runs with the wind” was getting the upper hand and finally felled Pa Pearson – Junior and Sissy panicked and ran for the far hills – Ma Pearson picked up the heavy frying pan to defend her honour. 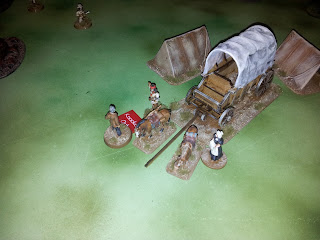 "Two Clouds" makes his way into the game
The rest of the Indians emboldened by “Runs with the winds” success charged down toward the wagon . A shot rang out – a flesh wound to “Runs with the wind”, Greenhorn Walt had found that lucky shot. Dom had sped his horse to intercept Junior as he headed round behind the rocks .He managed to calm the teenager and get him onto his horse.

Russ charges his steed towards the wagons in the hope of picking up young Sissy and Ma – he managed to get Sissy but came up short of Ma – “Two clouds” was heading their way intent on bloody murder. An action card was played , Russ moved again managing to get Ma on the front of the horse , but  with 3 people on it the move was curtailed – would he get away.? 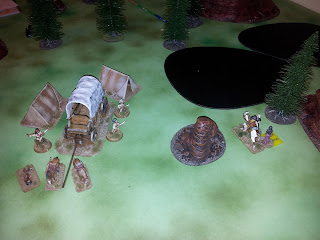 “Two Clouds” took aim with his bow, and the horse was hit and impaled, next he charged in and pulled Russ from the saddle intent on using his fighter skills to overwhelm the rescuer, with the next action. Ma fell from the horse as Sissy panicked once more and the wounded frightened horse sped off carrying her away from safety. “Two Clouds” took a vicious swipe from Ma’s frying pan - “a cracking 10 being rolled” she was a tough old bird- leaving him with a real sore head. He turned and felled her in the next round of hand to hand.
“Two Clouds” had his blood up and was intent on felling Russ next , but had missed Dom climbing up on the rocks taking aim with his rifle – crack – One Hit – “Fatal Head Shot”, the Indian leader was felled.

“Grey Wolf” mean time had taken the opportunity to scalp Pa - much to “Runs with the winds” chagrin, “Never silent” was intent on looting the wagon and hiding from the horsemen.

Pete finally deciding to do something galloped his steed to rescue “Russ” before the remaining Indians got themselves back together. He pulled of a superb shot while galloping past the wagon , seriously wounding “Runs with the wind” in the leg – he won’t be so fast now!  Thanks to a few action cards he was able to pick Russ up and move on round the rocks to meet up with Dom – they decided to call it day , no gang members were wounded , and they had rescued the now orphan Junior.

The Indians were squabbling over who will take control, and had found a rather fine bag of gold in the wagon – Pa had been a successful prospector after all.

Sissy on her wounded horse did not get far. She was rounded up by “Grey Wolf” and his band - another scenario for another day “The Rescue of Sissy”

Junior has joined Dom’s gang – where else would he go. He “Hates” Indians, and had picked up a useful “Explosives” skill while working with his Pa, he needs to grow up a bit to lose his RUNT skill though.

Dom’s crew headed to the nearest town “Casper”  where Junior told his tale of daring rescue by Dom, parents murdered , his sister being lost , and the demise of the notorious Indian leader – the gang were feted in town – extra bonus Fame points for good deeds. Oh and tales of a gold strike in Indian Territory – talk about trouble brewing.

Apologies for the moment , technical difficulties with getting the better pictures off Steves phone, we will have another go at it tomorrow!
Posted by DaveD at 23:19