The James gang (now there is a classic Old West name for you) , were up next. They were planning to hit the Stagecoach into Tumbletown coming from Hope Springs while it went through Pikes Pass just near the edge of town. One of the gang "Jeff - the Boom"  had been left in town for a period and was planning to use his explosives skills to help cause a distraction if any of the locals of the 4 town lawmen thought about interfering.

The other members of the gang had taken up position in the rocks, the stage thundered into view. 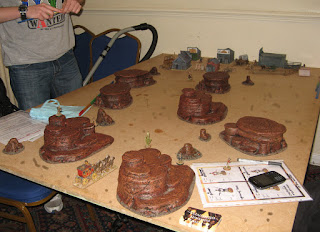 The route into town 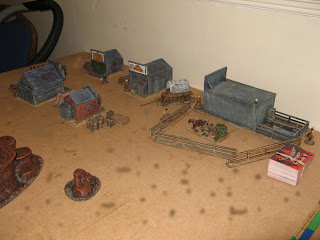 All quiet in town so far

The stage moved through pass, the turns of the card gave it 3 almost consecutive moves - if Steve who was rolling for the movement had rolled anything above a 5 on two dice , it may even have got through the ambush! 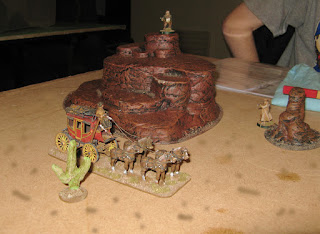 Something had to be done to stop it. The Greenhorn Bart moved forward and using an action card let out a warning shot attempting to halt the stage - this shot was also heard further down in town. Now everyone knew there was something afoot. The stage driver put a hand on his shotgun , and cracked the reins to move the team along.

"JJ" the Terrifying , Ambidextrous , Shootist (he's a nasty character alright) gang leader sensing things had the potential to go wrong , moved in and started blasting away at the stage, hitting the coach and also killing two horses which brought the team to a halt .

The stage occupants a gambler and an actress hit the floor. The gang approached the stage. "JJ" pointed his guns into the coach , "Your Money" he demanded with a menacing look. The two occupant's checked their nerves , and proceed to empty their purses.. $300.00... not enough thought "JJ".

The first shot had brought one of the town lawmen out on horseback to investigate , trouble is it was the Daniels the greenhorn with shotgun. He rode into view and seeing what was going on he lifted his weapon , and moved in closer. Seeing the terrifying "JJ" he panicked and galloping away, rode off further into the pass and past Bart.  Bart not missing an opportunity to back shoot the lawmen let loose with his rifle. FATAL HEAD SHOT, ouch. One law man down. 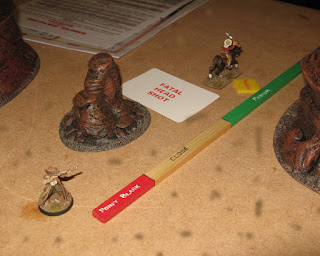 The unlucky deputy , back shot by Bart.

Back in town the other 3 lawmen were heading for their mounts, a cowpoke who was in town even offered to come and help them. Time for Jeff to light the fuse on the distraction. He threw the single stick of dynamite toward the mine supply company, it landed fine, just ready and waiting for his chance to blow it with his Explosive skill test. The "fizzing fuse" card was shuffled into the deck, a test for "Kaboom" would be made when it turned up. 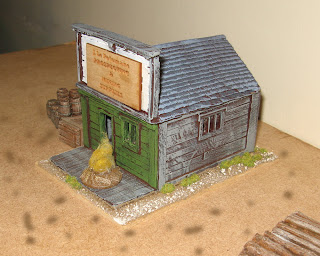 The fire starts to take hold
The card turned up pretty quick , Jeff threw and passed "Kaboom" it went off. We tested to see for extra collateral damage. There were 4 more sticks of dynamite that went off . The building was ablaze. Jeff legged it out of town wishing his horse was nearer! We made every character in town take a PANIC test as they activated. The Sheriff was seen cowering behind the jail. Two others were OK and mounted horses to try and deal with the desperado's. 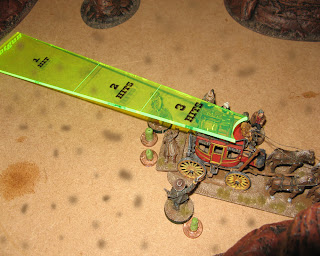 Back at the stage , more threats were issued and the gang flushed with success after killing Daniels set about systematically raiding the coach. More money was found, altogether they had $3000 in 3 lots.  However they were a little distracted by this success, and missed Stumpy the stage driver who had recovered his shock & overcame his fear and flicked the shotgun up, BOOM. The shot was on target and Bart the greenhorn at the rear of the coach took the full force 3 hits , down he went with lead poisoning, FATAL GUTSHOT

"JJ" spun and shot at the driver , missing , but still caused driver to drop the shotgun and off he ran. The wild shots at such close range did however hit both the cowering passengers wounding the gambler and the actress. 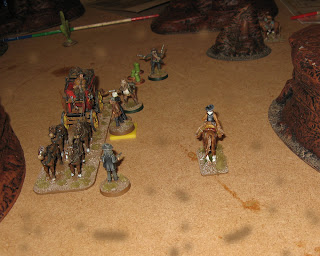 A rescue party from the town.

Two lawmen from town were now getting close. The gang headed back for their horses. A shot was aimed at "JJ"  wounding his leg and knocking him down. Would the lawmen be able to capitalise? 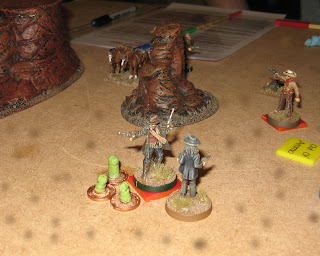 Smith the lawman had closed in enough for an attempted arrest (we were not letting the lawmen shoot opponents on the ground), just then "JJ" recovered and got up. Now it all depended on the turn of the cards. Seeing more lawmen approaching from town Smith decided at such close quarters to try a Hand to Hand combat which would knock the bad guy out so they could have a proper trial in town. The two slugged it out trading blows , but "JJ" was getting the upper hand, Smith went down. "JJ" was able to recover and at this point picked up a group of action cards, meaning all the remaining  gang would get a turn,

"JJ" made for the horses , the rest who were mounted already turned and made ready to gallop off, the cards were played , and the gang were off.

The lawmen had to move to help the the wounded occupants of the stage, hell this mob had shot a woman. Time to get out some Wanted posters. 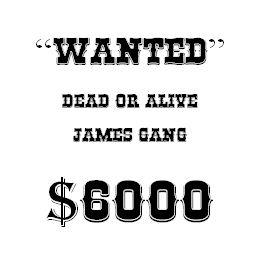 The gang hit the trail hard and were last seen heading through "Serenity" boasting of their exploits so much some young fool has tagged along in the hope of adventure.


This was a game that really could have gone either way , if the lawman from the town had all arrived together just as Stumpy on the coach let fly with his shotgun they would have overwhelmed the gang. As it was it was getting close , but "JJ" picking up a "fist full of action cards" meant he was able to get all the gang away. Once more we had the result that the bad guy gang member who  has pulled off the kill has become a victim himself.

Now of course this was the Stagecoach from Hope Springs .. the new law there  AKA the "Scott Mob" may come under pressure to do something about the lawlessness in the region.