The 5 men of "McGlades Marauders" having spent a campaign move scouting around the "Big D" ranch & had waited until there were few of the hands around. They planned to move in and rustle as many head of cattle and move them along to sell (after a little re branding work!) . Well this was a different scenario, one based more in the open , not so many building. The random element of the cattle to content with would also add another dimension. 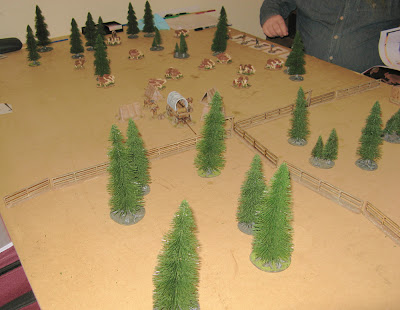 The set up with a cowhand camp in the middle.

The leader decided stealth of course would be the order of the day. , the gang rode in from the edge of the woods. A sharp eyed cowhand busy making breakfast in the camp spotted a horseman moving in , and headed out on foot see what the stranger wanted, one of the other hands who was mounted moved over too. 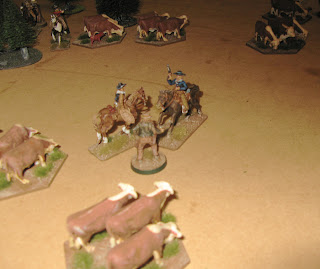 Harvey the Gunman began some story to keep the cowhands engaged - as long as he passed his skill tests he would keep them engaged in some "innocent conversation" - he was rolling well. he was getting a reputation as a bit of a silver tongue, a least 4 turns he kept them there - If he had failed he would have had to turn and ride away or choose to move for a weapon..

In the meantime more of the Marauders were working themselves around the herd. Another cowhand was discovered over to the east , and he was approached by "Shorty" , but he did not have the conversation skills of his partner. He bottled it after a first attempt of keeping him distracted. "Shorty" was on edge -  he decided to take a swing at the cowhand using his Brawler skills, at least with no shots there would be no immediate alarm . The two slugged it out over several rounds of hand to hand combat - with "Shorty" finally landing a knock out blow. The cowhand was on the floor. "Shorty" grabbed his breath and thought to tie him up and reached for some rope. A this moment the cowhands own card turned up and a Greenhorn activation was available - would he recover -  a "6" yes! The extra activation was played - the hand drew his piece and boom, boom, boom, shots rang out - but he was still too groggy to hit "Shorty" - the noise echoed across the herd and the valley. 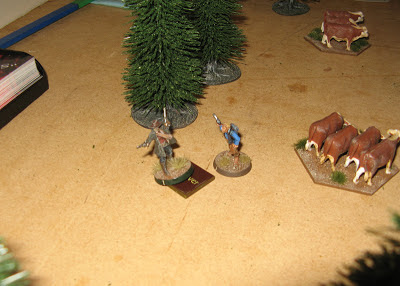 
Further over the other cowhands now realised something was afoot - and their hands moved towards weapons. 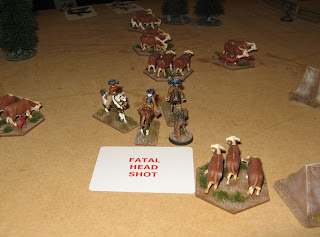 McGlade deciding the game was up charged in on horseback from the tree line toward Harvey and cowhands. He leveled his gun and let fly at the mounted cowhand - just the one hit - but the Shootist did not fail - the card was turned - " Fatal Head Shot"

The herd were well and truly spooked and the "Stampede" cards began to come into play , the herd split in a rather lucky way for McGlades guys , heading out past some of the mounted guys waiting.

The cowhands were now getting in some shots in response, but just a graze here or there. Nothing serious. The top hand who was away on the other side of valley had drawn his rifle and took a long range aim at the strangers in the middle, and a single flesh wound to the head knocked Harvey out of his saddle. Darn it was going so well. McGlade spurred his horse around racing to his accomplices aide ( a few spare activation cards helped) he got Harvey onto the front of his horse and set off out of danger.

The trail boss had shown up - "No you don't - you dirty thieves!" . He blazed away at the retreating outlaws as they rode past  - one hit - 50/50 which of the two escapees would it be . It was Harvey - already unconscious laid over the horse. "Fatal Gutshot".  McGlade looked down disconsolate at this friend -, he spurred on off the board carrying the limp form with him, and made a mental note about "hating that darn ranch boss - there will be a reckoning some day" 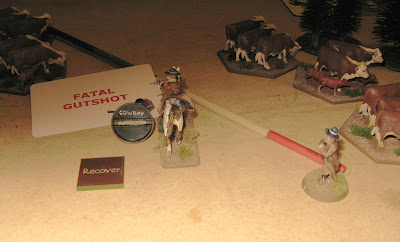 "Shorty "and another member of the gang knocked out and tied up the other cowhand , and made good their escape.

The remaining cowhands had decided it is was all bit too hot - they would live for another day - and talk to "Big D" about hiring on some more people.

McGlades Marauders - had bloodied themselves. But had lost a key gang member on almost the last shot of the game.McGlade determined some of the gang profits would be used to give Harvey a proper funeral over at the town of Bartlett once the steers had been turned to profit. . The $1000.00 would be money well spent.

A very different game in feel from the town actions, a bit more stealth and cunning being used - but the shooting!! These guys knwe how to do it.

A great game Colin - and really well played "in character"
Posted by DaveD at 23:17