Gav and Shannon having two of the smaller starting gangs decided to work together to hit a potentially high value target - the train from Serenity to Silver Town.

So there was the little matter of stopping it with a suitable barricade  , all helped by one of Gav's characters having a Train Driver skill.Some of the gang had the horses and set up a barricade.

Also as the action was going to be inside and out of the train we created a plan view of the train carriages , caboose and engine which we laminated and stuck to the edge of the playing surface. We could move those figures easily within the train and interact with those outside. 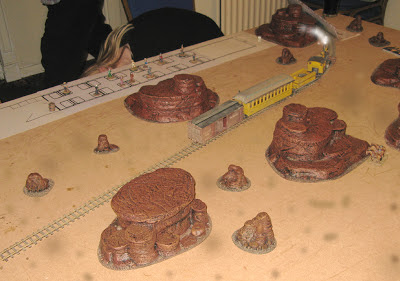 Some place for a robbery


The other gang members were sitting innocently on the train when it ground to a halt. One of them snuck out and crossed the tender to talk to the train driver and fireman. He found out he was not actually very good at this (failing skill rolls) - he had grand ideas of stealing the train I believe... now where exactly he was going to go , who knows. The fireman was getting suspicious.

Meanwhile in the carriage there were moves a foot , it started with a little pickpocket attempt that went wrong , the rest of the passengers were getting restless. 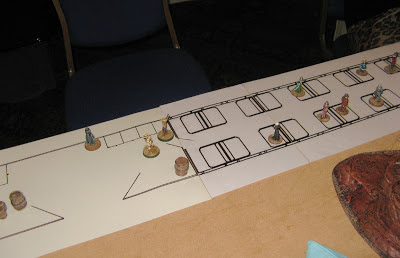 There turned out to be  mix of citizens and gunmen gamblers on the coach and even a local judge. Some of the ladies were armed with more than just feminine charm. A rather sharp hat pin , handbags and even a derringer. They were not going to take this lying down. A shot rang out as the gang saw it was going to take some show of force to relieve them all of their purses. At this the train driver worked out this "friendly" guy was up to no good, so the burly man swung for him with the shovel. The gang member reeled and a fight broke out with the driver knocking him out. Would they be able to clear the barricade? 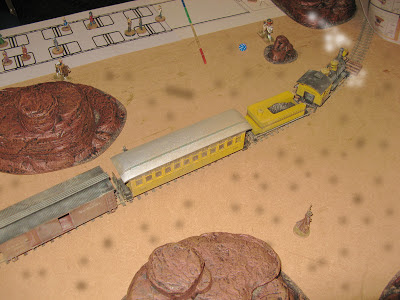 The outside bad guys.

In the carriage the Judge plucked up courage and tried to intervene, He was shot down for his trouble, more of the passengers panicked! The gambler was relieved of his winnings. Some of the civilians took the opportunity to exit via the poorly guarded rear door and ran for it.

Some more of the gang set off to investigate the contents of the caboose, in particular the strongbox and the safe, but wait - . they had missed  two guardians who had remained silent and unseen. Shots rang out , one of the guards was done , but the other was behind cover and blazing away. One of the gang went down FATAL SHOT THROUGH THE HEART.  The gang were heard to mutter this was all getting out of hand.  But with that the final guard was dispatched knocked out and bleeding from a shattered right arm.


Back in the carriage a fearless pioneer woman and her daughter set about one of the gang leaders  doing some serious damage with the hat pin in the first round! Gav the lead lightning fast shootist had had enough. He  marched into the carriage and seeing  the two ladies setting about the leader of his partner gang , in his own evil way thought hell backshots - lets do it. He blazed away hitting them both - and missing his friend. He just blew the smoke from his 6 gun  , and said "lets get the hell out of here..." , he dragged the beaten up gang leader away.. who will take a while to recover.

The final gang member in the caboose cracked the safe and a strong box. Between them they took nearly $60,000 dollars... although there is the problem of how they are going to divide up their spoils - i don't think it was fair shares....

All in all it turned into massacre...but they let a few get away so there is going to be a price on their heads. They need to spur their horses and get far away. 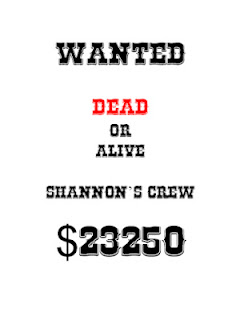 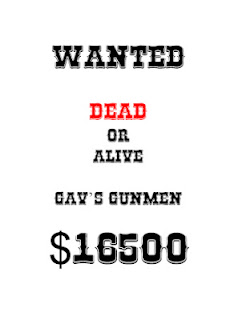