First game of the Old West Campaign last night. Saw one of the stronger gangs attempt to pull of a Bank robbery. 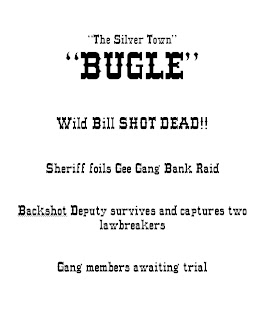 The 5 man Gee gang led by Curly Graham were working their way into Silver Town. Moving down both sides of the street they took up positions. Curly's leg was playing up and causing him to move clumsily on occasion. Rogers the boozer had even managed to stay sober , and also passed two saloons without being tempted by the bar, even fending of the attentions of certain lady - he was intent on one purpose that day.

Two of the gang had taken up position near the sheriff's office , one near the bank door. Two more were covering the route back out of town. Was some foul plan about to commence? 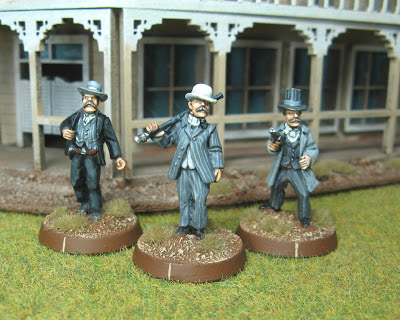 A sharp eyed Deputy leaving the "Star Hotel" spotted an unfamiliar figure loitering behind the jailhouse and suspecting some foul intentions went to investigate - he saw this figure still wearing his guns - and called out for the man to drop his weapons as he was "breaking town ordinance no17 - all weapons must be checked in at the nearest saloon".  This confused the potential bandit - he checked his morale - and failed - he threw down his weapons. This somewhat startled his junior gunman partner a little further down the street who was watching from behind the brave or foolhardy deputy.  The worried gunman raised his 6 gun and squeezed its trigger sending of a shot towards the back of the Deputy -  which only winged his arm.  This was happening too early - they were supposed to get someone into the bank first!

The gang member Williams outside the bank waited for his turn , and waited... finally he threw to enter the bank - gun at the ready.. snake-eyes .. the "Double 1"... he had only managed to attempt to open the door the wrong way and threw himself off balance.  At the this point the gang learnt that the town Sheriff was within the Bank . Seeing an anxious unfamiliar face by the door, gun in hand  and hearing shots the Sheriff  moved to shut and bar the bank doors in the face of the bandit. Clang .He took position by the barred window.

Now what where the gang going to do. More shots rang out across the street by the jail , the lightly wounded deputy was leading a charmed life. A shotgun barrel poked out of the Sheriff's office and BOOM.. down went the dirty back shooting gunman, knocked out with a head injury. The deputy moved to kick the wounded mans weapons away. Meanwhile his previous target had recovered his nerve and picked up his weapons and started firing , blazing away to little effect.

There was much shouting among the gang.. DYNAMITE!!  perhaps that's the answer - there was a mining supplier in the town - Curly headed off while the gang tried to keep the law pinned down. Although it felt more like the 3 outnumbered lawmen were doing the pinning down! The Gee Gang wanted to know if there were any 6's on their dice!  They were running low on ammo with all these reloads

Curly's leg gave way again as he tumbled to the floor near the Le Petamaine Mining Supply Co.  The Stagecoach drew into town - there is a 10% chance of there being someone "interesting" on it.. sure enough up it came ... the random cards of good guys, gunfighters,gamblers bounty hunters etc were shuffled ... and one picked which was added to the deck. who would it be.

Only Wild Bill Hickcock... down from the stage he stepped - seeing Curly a hated enemy - "You and me Curly - lets sort this like men"... the shooting died down in town and the two squared up across the street - Fast draw time - Hickock drew first and down went Curly knocked down &  bloodied in his one good leg!

The gang began to panic. A Deputy emerged from the jailhouse and dragged in an unconscious outlaw and threw him in a cell. The cowardly bandit again dropped his weapons and surrendered to the plucky deputy who marched him into the cells.They will meet Judge Parker later.

Only two gang members left - both Shootists - moved away from the bank toward Wild Bill (and thier horses)  , he turned and said  "Stay Right there boys - I will take the two of you on!". Hands quivered over holsters.  Wild Bill drew before one them , and at the same time as the other -  but no hits!  Rogers hit Bill with a serious Knock Out wound in the Stomach. This left the lawmen at one end of the town with their prisoners  and the wounded  Curly and the two Shootists at the other. Rogers decided he had better finish off the seriously wounded Hickock - better not have an enemy like that around the recover - he earned no credited only hatred for the dastardly deed. Curly was flung over a horse and the gang made off out of town - empty handed and with two men waiting on town justice.


Another cracker of a game - mind Graham must have rolled the best of 120 dice and got about 2 6's at one point.  Dom letting off that wild shot before getting someone into the bank would not have been too bad if the complete fumble by the bandit attempting to get in had not happened. The bad guys had the run of the cards initially, but the lawmen really drew some at important times which confounded the Gee gang.  Some of the events you really just could not have scripted - keeps everyone on thier toes. Well done Steve for really playing in the spirit - with his brave lawmen arresting not shooting the bad guys.

The real difference was that as this now a campaign system there was more care and not just a full on firefight with no consequence. 3 more gangs signed up for the campaign as well. The Gee gang need to get Curly fixed up and decide how to "rescue" their buddies.

No other pictures - I forgot to take the camera!!