This was Dom's second game, in the previous he had encountered the Indians, and rescued the "Kid" who had joined up with the them. Big Dom was in town making his mind up what to do next , and the gang were stocking up on supplies ,including dynamite which the "Kid" is killed in. Just as they were thinking about perhaps causing trouble a lone horseman rode hard into town and announced there was Indian warband hot on his heels.

Just then the first of the Indians were spotted - it was the same band Dom had encountered before with some extra re-enforcements .The Medicine man had worked his magic on the warband - the whole band were"Charmed" believing themselves invincible. These were going to be a tough lot to tackle. But what were they after?  There leader appeared it was the legendary "Lone Cloud" - seeking revenge for "Two Clouds death".

The womenfolk took fright. Dom's gang, the two lawmen and the citizens armed themselves.  More Indians were spotted around the edges of town, shots and arrows began to fly. 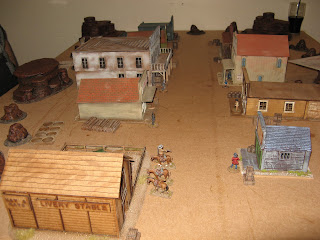 It was all quiet

The Indians had snuck around behind the buildings , Lone Cloud pounced upon a poor citizen , quickly overcoming him and relieving him of his scalp. 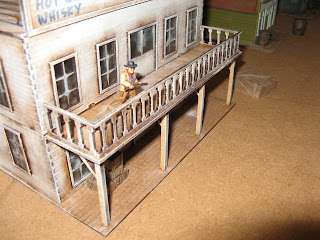 Lone Cloud his blood up continued his charge into town looking to dispatch town doctor. The "Kid" took Lone Cloud under fire trying to save the doctor. The "Kid" was up for revenge for his own family as well. The doctor luckily managed to draw a card at just the right time and ran away into the hotel covered by a lawman. 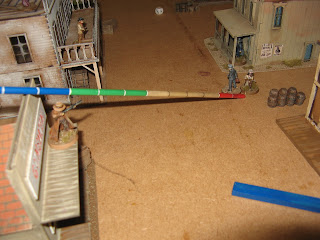 A number of townsfolk panicked in the face of the terrifying Indian leader, and took to hiding. 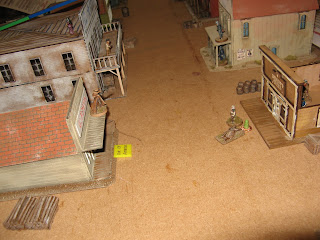 Russ who had been at the far end of town sourcing dynamite ran into the centre to provide support , Lone Cloud raced and raced toward him brandishing his knife, two rounds of hand to hand later Russ lay on the ground . Who was going to stop this one man killing machine rampaging through the town?

Pete who had taken covered in the jail saw the Indian Leader with his back to him, shot through the window blazing away , a severe case of lead poisoning was dished out - and down Lone Cloud went knocked out.

Walt the remaining gang member was attempting to fend off 3 Indians from within the barricaded Dry Goods store at the other end of town, but he was running low on ammo - and not hitting anything to boot. He panicked looked to break away from building and move towards the hotel in the centre where most of the citizens had gathered. Grey Wolf a swift Indian set off after him closing in on a kill , just as Walt reached the hotel he was caught with two swift blows to the head Grey Wolf loomed over him. The "Kid" again came to rescue he had moved in and seeing the Indian blasted away and killed one of his hated foes.

The townsfolk and lawmen had finally got themselves organised and were able to unleash a number of shotgun and rifle shots on the Indians , this finally stopped the onslaught. The Indians retreated.

Dom upon searching the Indian leaders body saw a necklace, the "Kid" said it had been his sisters - so she had been captured - , but were was she , is she still alive?

Dom had managed to not cause any trouble in town  before the Indians arrived , so the gang is still on the right side of the law. At one point the Indians threatened to overwhelm the gang and townsfolk. The "Kid" is getting a bit of reputation.  This was a fast and frantic game.- all good fun!